The PENCEL is a small Pressuremeter System used to run in situ loading  tests in soils. 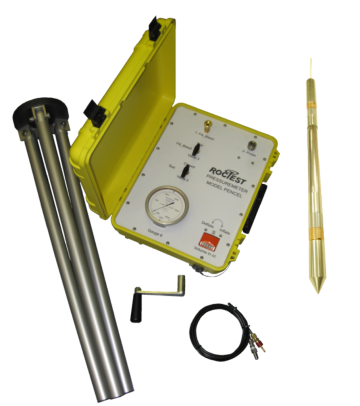 The Probe
The mono-cellular probe consists of a cylindrical body fitted with an inflatable sheath, fluid inlet and saturation ports, a conical drive shoe and a drive rod adapter.

The Control Unit
The control unit consists of an ABS enclosure supported on an aluminum tripod and containing the cylinder, pressure gauge, digital volume indicator, control valves and tubing connectors.

The Tubing
The standard tubing consists of a single conduit fitted with shutoff quick connectors at both extremities, which allow the probe or tubing to be uncoupled without desaturating the circuit.

The PENCEL is a highly portable system that offers simplicity and economical operation. The probe is set directly in a borehole prepared in advance using a hand auger or driven pipe. It can also be inserted by static pushing or by light dynamical driving. No heavy drilling equipment is required for testing with the PENCEL, making it an especially attractive instrument for use on sites where access with heavy equipment is impractical, or in a economically restrained situation.

The probe is set in place. The test is then typically run in steps of equal volume increments.
The test data gathered with the PENCEL pressuremeter, like that gathered with other pressuremeters, yields a stress-strain curve from which two main parameters are obtained: